Last week in Silicon Valley was all about European innovation. (By that, I mean that there was a brief lapse in focusing on our 20-mile radius only.) More seriously, it was European Innovation Week with a multitude of events, bringing together innovation-focused Europeans and europhiles, startups and scaleups in the Bay Area.

There are promising signs of a coalescing arena, but we are still far from having a game plan for the innovation aspects of a transatlantic partnership: sometimes we even struggle with the very definition of this space. Even if there are some encouraging trends recently, it can be said that Europe and the US are under-utilizing their joint innovation potential.

Existing ties: is there a critical mass?

According to last year’s report from The Bay Area Economic Council, ties are pretty strong between Silicon Valley and Europe and our innovation economies are getting more and more integrated. To quote a few high level numbers:

Based on the above data only, cooperation seems to be pretty strong; however much of it may be illusory. For one thing, businesses may have growing ties but policy cooperation is lagging far behind.

For one thing, there seems to be a new level of maturity in Europe when it comes to innovative companies scaling up. Recent data indicates that 97% of “EUnicorns” were founded in 2011 and earlier and have considerable sophistication by now. Sources are a bit contradictory, but we can safely say that there are at least 100+ “Unicorns” and 1000+ scaleups in Europe (and those numbers mostly reflect Western Europe). Maturity is also reflected in the fact that for more and more EU companies — being faced with the grim realities of affordability saying adieu – the Silicon Valley of today is less of a place for “innovation pilgrimage” or to start up, for that matter. As Reid Hoffman argued recently at his Stanford lecture, Silicon Valley is more for scaling up these days, using the incredible concentration of the network here to take over the world. Persistence remains a virtue, but the costs can simply be too high. 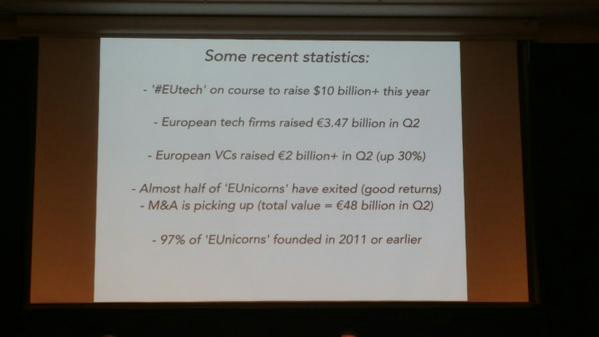 If we take look at investors, the trend is that EU investment speed and volume is heavily accelerating. Last year, close to 50% of EU startup acquisitions were coming from the US and almost half of EUnicorns have exited. Many pundits say that the phenomenon of turning towards European markets is also a clear sign of an overheated Silicon Valley, besides EU markets catching up in maturity.

All of the above hints at a very unilateral dynamics and a lack of a systemic cooperation. On the other hand, it should be applauded that the EU is investing more and more into its ties with Silicon Valley, even if the methods need considerable improvement. At this point, our impression is that the EU thinks that Silicon Valley is sexy, but is hesitant to take the relationship to the next level. What may be the underlying issues?

All improvement starts with self-reflection. More and more often, the EU admits that Europe is lagging behind, which can probably be best captured in the phenomenon called “The Extended European Paradox”. The term was originally used by the European Commission to define the European phenomenon of having good higher education systems, good research infrastructure and results, but failing to translate this into marketable innovations. This means that while out of the top 20 R&D spender companies 30 % are of European origin, out of the top 10 most innovative companies there is not a single European company. Transforming the relative success of European economies in basic research activities into commercial success seems to be really difficult.

First, Europe has been unable to take full advantage of recent technological revolutions, particularly in ICT, which results in a much lower productivity than the US. According to IDC, less than 2% of European SMEs take full advantage of digital technologies. While an increasing number of EU tech companies come to Silicon Valley to break into global markets, this is a one-directional process: the lessons learned seldom make it back to Europe and never systematically. We need to change that.

Secondly, innovation and its dissemination have to face strong barriers, especially in the public sector which represents almost 40% of the EU’s GDP. Moreover, an innovation-friendly business environment is still missing in Europe: that is, newcomers have fewer possibilities against firms who are already on the market for many years. Thirdly, there is too much fragmentation, duplication on efforts and overlap between EU and national-regional research and innovation programs.

Let us take a look at what can actually be done as part of a transatlantic partnership to improve the present conditions.

Further integration is inevitable, since tech companies are global in essence, but using the mutually realized strategic importance of a transatlantic partnership, can we consciously take this to the next level or two? In other words, what is the specific transatlantic opportunity here in the innovation arena?

Funding: 90% of VC funding in the US is private money, 40% in Europe is government funded. According to its critics, the latter can be interpreted as a potential hindrance from the market viability perspective. However, it can be suggested that it is also a great opportunity to have more diversified funding and long-term thinking in new ventures. Without trying to argue simplistically for the primacy of one or the other, we should focus our attention to how to fuse these mindsets and respective realities. One potential outcome can be to consciously start experimenting with the creation of “hybrid” transatlantic funds and we keep hearing about such attempts from both public and private players. At the very least we should make transatlantic innovation players consciously include innovation public funds (such as the EU’s Horizon 2020) part of their fundraising strategy, if applicable.

Regulatory support: You may be an ardent supporter or have reservations about it, but the TTIP (still about 2 years out, we hear) is the main receptacle for a reinforced emphasis on innovation and its regulatory support. It remains to be seen though whether innovation will make it into a separate TTIP chapter, but even if the essence of innovation would get appropriate treatment in other chapters, that would be beneficial.

TTIP suggestions prepared by the Transatlantic Business Council are certainly helpful if sometimes narrow in scope. The biggest conundrum for administrations on both sides (especially in Europe) is how make the connection between large-scale innovation investment resulting job creation and inducing growth as direct as possible? Suggestions such removing regulatory (in some cases, protectionist) barriers are self-evident. A more interesting one is stimulating economic growth by driving innovation public sector demand, even through governments becoming early adopters of innovative technologies. Reinforcing incentives for shorter-time-to-market through funding the transition process from R&D to commercialization may be a very practical approach.

Train the leaders: Many conversations we had recently show that the political class on both sides realized that the imperatives of a 21st century Innovation Economy would necessitate the emergence of next generation leaders, who share similar levels of understanding and commitment to innovation. To bridge the existing gap between Silicon Valley’s mindset and that of reality on the ground, these nextgen leaders (especially policymakers) should receive customized training, access to transatlantic innovation peer networks and best practices, and have their voices heard at the table to be able to formulate new solutions to new problems.

Collaborative innovation: Needless to say, multinationals active on both markets are best equipped to make use of the speed and breakthrough solutions of top-notch startups & innovators. Collaborative innovation (i.e “marrying” corporations to startups) is definitely getting traction and transatlantic ecosystems will be the result — the question is how fast and how efficiently. The right structures and incentives are needed for corporate entities on both sides to be able to tap into respective innovation ecosystems. It would be worth considering finding ways to incentivize this promising trend with e.g. co-funding mechanisms.

Many European corporations have already decided to have ears on the ground in Silicon Valley (outpost and annexes) and 38% of the Fortune 200 have already decide to create innovation centers. About half of these centers land in Silicon Valley and setting up shop here is unbeatable in many aspects. These corporations have realized that learning from the world’s best and having a constant inﬂow of cutting edge information will be vital to their transformation. We hope a lot more will do so.

Knowledge transfer: Transatlantic Innovation should become a topic studied and published in transatlantic academic circles. Given the importance of innovation for both the EU and U.S. economies in keeping and fostering global leadership, the transatlantic innovation argument should be made and should have a group of dedicated scholars as well as a wider circle of experts.

Beyond academia, new platforms will be needed to facilitate transatlantic innovation knowledge transfer. We have a notion of where the strengths lie (i.e. “hard Tech” skills in Europe, soft Business skills in the US etc.) Dedicated transatlantic platforms helping with identifying mentors, advisors and potential co-founders on the other side could work wonders. The EU should develop funded infrastructures and mechanisms which would enable all types of stakeholders to be trained in Silicon Valley and put the lessons learned to Europe’s use to speed up the approximation process.

In conclusion, it is high time all stakeholders realized that innovation is not a buzzword: it is the main driver of 21st century competitiveness, a key to enduring prosperity and global leadership. The tide is coming regardless of our action or inaction; so we should strengthen our transatlantic partnership, put on some “holistic goggles” and come up with the right, actionable transatlantic innovation strategy. We live in an age of continuous transformation and we can only prosper if we abide by the new rules: let us master the Age of Innovation together.

The next wave of innovation

that is important for us

Learn more about the latest news in innovation, digitalization and fundings. Accompany us and let’s shape the future together. 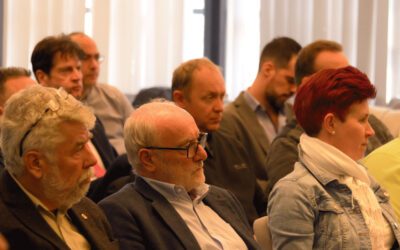 PROAGRO: Digitalization is an advantage in economic competition

2022.03.24. - 6 min read On March 8, the “Providing Professional Innovation Services for The Agri-Food Sector in Southern Hungary - PROAGRO”project launch event took place. Nearly 70 registered professionals who were interested in the topic were able to follow the...

END_OF_DOCUMENT_TOKEN_TO_BE_REPLACED 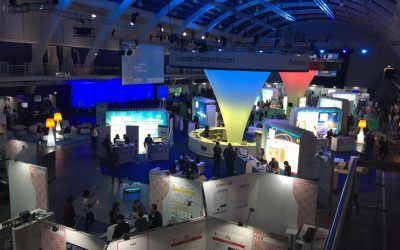 2022.02.14 - 3 min readFrom October 19th to 22nd, more than 7,000 stakeholders gathered in Lisbon from all segments of Europe to innovate, connect and transform the European digital industry. In the keynote speech, European Commissioner for Digital Economy &...

END_OF_DOCUMENT_TOKEN_TO_BE_REPLACED 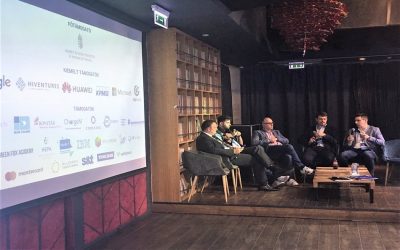 Fundraising in CEE – the future of Alternative Financing

2022.02.14 - 2 min read April 2019, Budapest, Hungary – SMART Conference SMEs are increasingly turning to alternative financing options in Europe, as there are many #alternativefinancing options available online where Startups and SMEs can apply and get funding much...

We use cookies to provide you with the best possible user experience. Read more
Cookie settingsOK
Manage consent